Google Translate lets you translate words or phrases from one language to another, but did you know that there’s a formula you can use to translate a batch of words directly in Google Sheets? Here’s how to do it.

Integrating Google Translate with Google Sheets was a good call. Now you no longer have to switch back and forth between tabs to translate text. Translating text in Sheets is as simple as inputting a formula. Here’s the structure of the formula: 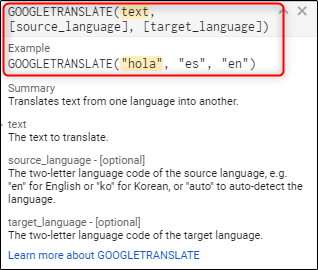 In this example, we want to translate the English words in column A (which we’ve named “English”) into their Chinese equivalents in column B (which we’ve named “Chinese”). Since we have the words already in the sheet, we can just call the cells that contain them. Here, we’re calling cell A2, which contains the word “Cake.”