Virtual Desktops are coming to Chrome OS. The first glimpse of how this is going to work showed up in February, and now there’s a new video of how the feature is progressing. And it looks amazing.

As Chromebooks have grown in both feature and popularity, this is a feature that many users have asked for—myself included. Having the option to switch between multiple screen layouts for various tasks seamlessly would dramatically improve workflow on Chrome OS, and the implementation shown in the video looks great.

All that said, this is still a very early—and notably unfinished—look at how “virtual desks,” as they’re being called, will work. First off, we know that the number of desks will be limited to four. That’s understandable, especially given the lightweight hardware found in most Chromebooks. Comments on the video also note that desk switch animations or mini view haven’t been implemented yet. Again, understandable since this is still very much in development. 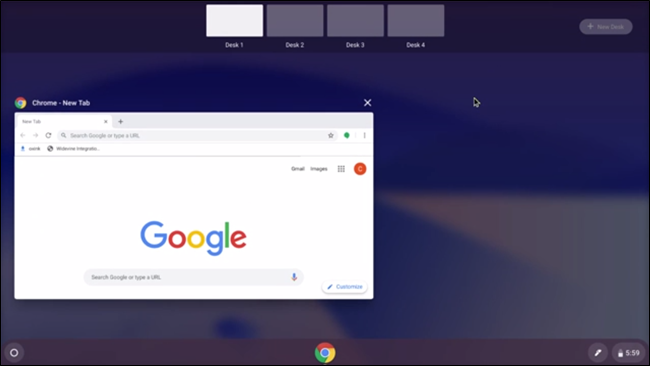 While we’re getting a better look at how the feature will work, there’s still a lot of unanswered questions. For one, how much of a hit is this going to have on the system—especially lower-end Chromebooks? I’ve been able to peg my Pixelbook’s 8 GB of RAM on more than one occasion with little more than a slew of Chrome tabs, so I can only imagine what it will be like when I can keep multiple apps open across several desktops.

Secondly—and probably the more significant question—when can we try it? As About Chromebooks’ Kevin Tofel points out, it’ll probably be Chrome OS 76 at the earliest. I’m just glad I keep my Pixelbook on the developer channel, as this is one feature that I absolutely can’t wait to try out. [via About Chromebooks]

In other news, Google is having a hard time selling Pixel phones, older Huawei routers were found to have hidden backdoors, Energizer’s massive-battery phone flopped hard, and more.

In a bit of interesting science news, scientists have found that “water worlds”—exoplanets completely covered by one huge ocean—are not only common in our galaxy, but have more water than initially imagined. We’re talking massive amounted of water here; potentially thousands of kilometers deep. Of course, water worlds are still technically hypothetical is it were, but this new research, paired with computer simulations, show that planets that were previously thought to be gas with thick atmospheres are actually water worlds. Neat. [Gizmodo]