AutoHotkey is a fantastic but complicated piece of software. It was initially intended to rebind custom hotkeys to different actions but is now a full Windows automation suite.

AHK isn’t particularly hard to learn for new users, as the general concept is fairly simple, but it is a full, Turing-complete programming language. You will pick up the syntax much easier if you have a programming background or are familiar with the concepts.

AutoHotkey’s installation process is straightforward. Download the installer from the official website and run it. Choose “Express Installation.” After you’ve installed the software, you can right-click anywhere and select New > AutoHotkey Script to make a new script.

AHK scripts are text files with a .ahk extension. If you right-click them, you’ll get a few options:

While a script is running—whether it’s an EXE or not—you’ll find it running in the background in the Windows notification area, also known as the system tray. Look for the green icon with an “H” on it.

To exit, pause, reload, or edit a script, right-click the notification icon and select an appropriate option. Scripts will continue to run in the background until you exit them. They’ll also go away when you sign out of Windows or reboot your PC, of course. 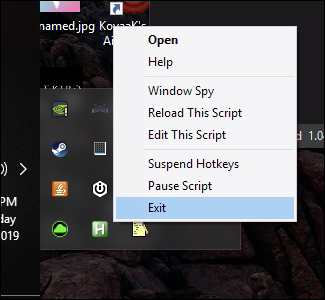 How Does AutoHotkey Work?